LGBT History Month takes place over the month of February annually with a number of events taking place across the country.

This year we are inspired by the theme for LGBT History Month 2020:

‘What Have We Learned?’ will reflect on the multi-generational impact of the legislation which silenced teachers, preventing them from talking about LGBT issues in schools, and left thousands of young people without the support they so badly needed. It’s an opportunity to celebrate the steps we have taken to undo the legacy of Section 28 and make some bold commitments for the future.

Section 28, introduced by Margaret Thatcher’s government as part of the Local Government Act 1988, banned the “promotion” of homosexuality by local authorities and in Britain’s schools. The law was introduced when tabloid media coverage of LGBT issues was already largely hostile, particularly in relation to the AIDS crisis of the time, and ignited an angry fight back by the LGBT community. This included memorable moments such as when protestors abseiled into the House of Commons and when a group of lesbians interrupted a live BBC news broadcast. 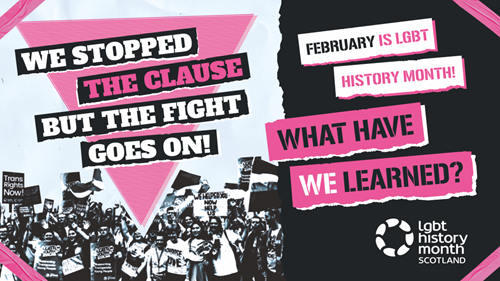 After a decade of campaigning, Section 28 was repealed by MSPs on 21 June 2000 with a 99 to 17 majority vote, but the legislation left an enduring legacy. Guidance on what teachers could now talk about with their pupils was not forthcoming, leading to years of continued uncertainty about what was appropriate for discussion in school settings. It is only in recent years – thanks to the hard work of teachers, campaigners, charities and local authorities – that meaningful progress has been made in beginning to undo the toxic legacy of the law.

The last Friday of the month is Purple Friday – You can support Purple Friday by following #PurpleFriday on social media and tagging others who you would like to encourage to also be a catalyst for LGBTI inclusion and equality. 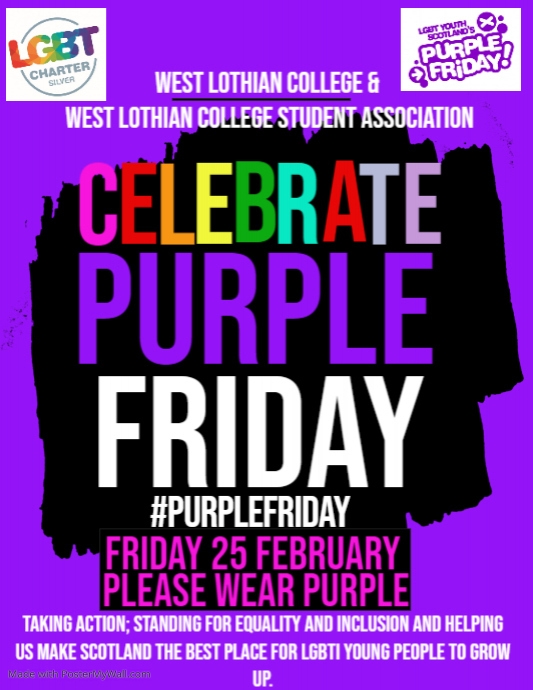 We are supporting LGBT History Month and Purple Friday in West Lothian College as we believe in equality and inclusion for all.